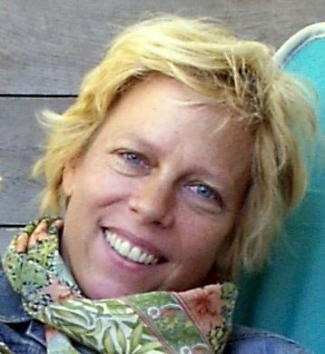 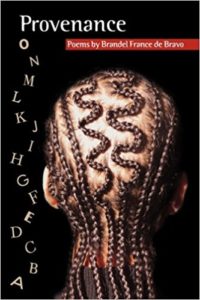 Brandel France de Bravo’s poetry has appeared in Fugue, The Kenyon Review, Black Warrior Review and The American Voice, as well as in anthologies such as The Beacon Best of 1999, Creative Writing by Men and Women of All Colors; Fathers, A Collection of Poems; Outsiders, Poems About Rebels, Exiles and Renegades; and Hunger and Thirst. A graduate of Warren Wilson’s MFA Program for Writers, she has been nominated for a Pushcart Prize and was the recipient of a grant from the D.C. Commission on the Arts and Humanities. Her first collection of poems, Provenance, was a semifinalist for the Academy of American Poets’ Walt Whitman prize, as well as the 2009 Larry Neal Writers’ Award for poetry. Brandel is also co-author of Trees Make the Best Mobiles: Simple Ways to Raise your Child in a Complex World (St. Martin’s Press).

I am the harried health
consultant just landed
in Ghana. The taxi driver
thinks he knows
where it came from,
how it spreads.
The foreign man. He come
and lick the woman,
he says, flicking
his tongue in and out
like a snake. I laugh
and tip him two condoms.

Juanita spoke Spanish,
lived in the apartment
next door, had the desk
next to mine at Booker T
elementary. In third
grade she taught me
the meanings of saber.
¿Qué sabes tú?
What do you know?
¿A qué sabes tú?
What do you taste like?
Later that day
in Black History month,
during George Washington
Carver and his peanuts,
she brought her nose
to my forearm—the blond
hairs lay down beneath
her breath—and licked.
By the time Miss Baker
threw us out,
she was savoring
my apple-round shoulder.
Banished to the hallway,
we sat on the floor,
side by side, in silence.
I hugged my knees: my arms
smelled like plantains.

The man in Damascus
put whiskey in my beer
and his tongue between
my pinkie and ring finger,
ring and middle, middle
and index, index and thumb . . .
I was in a divan-lined
living room, other people
present, so I thought,
what’s the harm?
I’ll let him
for a little. Avoiding
his eyes, I fixed mine
on the black velvet
Mecca above his head.
A couple of minutes
went by before I
jerked away, slapped him
with my wet palm.
They held him back
long enough for me
to leave. I would have
anyway. He already
knew too much.

A sarcastic Egyptian always speaks
of apricot season, which comes and vanishes
faster than dreams over morning coffee.
Oh sure, he’ll take care of it—in apricot season
which falls between mañana and the cows coming home,
a time so fleeting, ephemeral,
it might as well be never
or what we cannot recover:
the buoyant forever when we held our noses
underwater where no one could see
and touched tongues for the first time;
the certainty that certain transgressions
meant no turning back.
It isn’t innocence we miss
but the thrilling moment that we let go,
a stem splitting from the branch, fruit in free-fall.

Cecilia was the first among us to ripen,
breasts at eight, and shortly after
rendezvous with boys in the bushes.
No one called her “slut.”
She floated above us
like Mary in a procession,
her wooden robes fluttering in the wind.
We supplicants longed for a guilty glimpse
of her panties, her early bloomers,
named for Amelia Jenks Bloomer,
who like Cecilia was ahead of her time.
While others fought for suffrage,
an end to slavery,
she dreamed of simpler underwear,
a garment so free, it might as well be nothing,
loose as an apricot,
that precocious apple,

Lolita of a peach.

We meet a Mayan cowboy, Archimedes, a diamond smuggler and a nightclubbing saint in this collection of poems bound together by the themes of place and origin. In Provenance, Brandel France de Bravo explores not only her own roots but the roots of words. Taking her cue from Ralph Waldo Emerson who said, “Every word was once a poem,” she has written 26 poems—one for every letter—inspired by etymologies. By braiding autobiography with the biographies of “Apricot,” “Zygote” and everything in between, the poet tells a story that transports us to places both familiar and far-away.

Sharp-eyed, sharp-tongued, sharply etched and sharply worded,Provenance is a book of alphabets and fables, of narrative precision and verbal passion. Across a host of exotic locales, and through the labyrinth of etymology, Brandel France de Bravo is a poet of restless travel and linguistic inquiry—what luck for the reader who accompanies her on the voyage!

In Provenance, Brandel France de Bravo writes with urgency of continuous displacement, an exile status rendering her exquisitely sensitive to the textures of daily life. She is forever a stranger among those who do not ask “where I’m from, but where I’ve just come from, / which country I left last.” At home in many cultures, at home in none, this gifted poet transforms a search for identity into a voyage through language, and finds her true roots in the alphabet letters that generate experience. This is a remarkable first book, and an important one in our time.