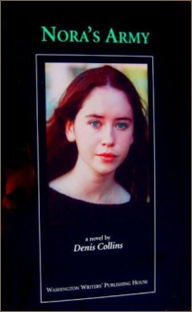 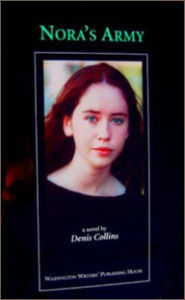 Denis Collins has been a journalist with the Washington Post, Miami Herald and San Jose Mercury News, and a freelance writer in New Zealand, Belgium and the Netherlands. Spying: The Secret History of History, a non-fiction book was published in 2005. He lives in Washington DC where he publishes a creative writing journal, The Oracle.

Nora’s Army is a racially charged love triangle set in Washington DC during the spring and summer of 1932, when 60,000 WWI veterans set up camp around the US Capitol to lobby for early payment of a congressional bonus. For one of the first times in American history, blacks and whites in those camps lived in complete integration. The novel’s three main characters are: Nora O’Sullivan, a 17 year old Irish girl who crossed the Atlantic while tracking a thief. Randolph Walker, 18-year-old Communist organizer. He grew up as a middle class white kid until the age of 13 when his father discovered his illegitimacy and sent him to DC to live with his black paternal grandfather. Eric Sevareid, 19-year-old fledgling reporter who writes the first Bonus Army stories. The friendship and romance that develops among Nora, Walker and Sevareid is the core of the novel.

Finally, a Washington novel with George Patton’s cavalry, Douglas MacArthur’s cigarette holder, a love triangle, Death Marchers and a nearly happy ending beside the embers of a torched Bonus Army camp.
—Christopher Buckley, author of Thank You for Smoking

Denis Collins has the eye of an Impressionist painter, the ear of a Beat poet, and the instincts and skills to capture place that rivals the best of travel writers. He evokes the sights, sounds and passions of an earlier era with exuberant and dramatic precision.
—William F. Allman, author of Apprentices of Wonder

Nora’s Army by Denis Collins is an amazing book. I only use “amazing” 3 times every ten years, now that the word has been co-opted by TV hosts and college kids. Denis Collins presents a time in history, 1932, where very little fiction has focused with precision on Washington DC. This is history and fiction, featuring members of the bonus army camping in Washington, waiting for recompense and restitution via US Congress. The technique Collins uses is suitable to his historical realism…chapters from the Point of view of each main character, with an arresting love triangle, and a huge panorama of events that is made for wide angle high definition screens. Through prevailing political ideas, there is a love for the world of the past, the specifics of history and precision of place. With a strong sense of the fundamentals, of a seething city, Collins maneuvers a large cast of characters through tentative love, racial complexities, interracial love, spiritual and psychological gains. Collins is endowed with intelligence, the necessary power at the helm, holding it all together. There is suspense throughout the writer’s supreme network: tramps, hobos, veterans, heroes, military icons. Eric Severeid is in the triumvirate of major characters. This thread of recognizable personality lends an exuberance to the story. I loved roaming the streets of DC in the first part of the 20th century at a meaningful time, told by a masterful teller of time.
—Grace Cavalieri, The Montserrat Review