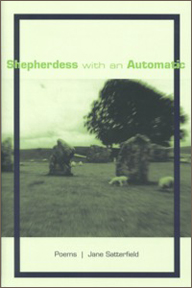 Jane Satterfield, who was born in England and educated in the U.S., holds an MFA from the University of Iowa Writers’ Workshop. Her works include two poetry
collections, Shepherdess with an Automatic (WWPH, 2000) and Assignation at Vanishing Point (Elixir, 2003), and a memoir,Daughters of Empire: A Memoir of a Year in Britain and Beyond (Demeter, 2009). Her poetry has been anthologized in Sweeping Beauty: Contemporary Women Poets Do Housework (University of Iowa Press, 2005) and White Ink: Poems about Mothers and Mothering (Demeter, 2007). Among her awards are a 2007 National Endowment of the Arts Fellowship in Literature and the 2000 Towson University Prize for Literature for Shepherdess. She teaches in the Writing Department at Loyola University Maryland and lives in Baltimore with her husband, poet Ned Balbo, and daughter Catherine.

In Shepherdess with an Automatic,Jane Satterfield searches for the “world with­out the ideal,” one that’s “beyond doubt,” where desire lives “in a perspective/yet to be reached.” These poems are edgy, taut, and elegant. They are filled with the rich figurative language of a moral intelligence, rare for poets of Satterfield’s generation.
—Michael Collier

The supremely articulate, assured and urbane poems of Jane Satterfield keep their poise in an untrustworthy world of “flickering lights,” “combustible matter” and “mangled music.” Anglo/American anguish at the absent green pastures of an old refuge is given voice in dazzling turns of phrase and an improvised composure, as this “shepherdess” tracks the trans its of desire and a rest-less intellect across the past-haunted, “bone-stuffed” ground.
—Eleanor Wilner

Under the unusual composure of Satter­field’s first collection is a turbulence that— even as it is resisted—colors her poems. “The song heard in snatches” is the one readers will find here, a “slender glimpse,” a “reckless glance”; sounds are “viewed” as delicate enticements for change.
—Judith Hall

Jane Satterfield’s poems display many of the best qualities of an ambitious new generation of poets. Intelligent, strictly-phrased, unsentimental, Shepherdess with an Automatic convinces us that the large questions— however unanswerable— remain indispensable: What is one’s place in history? In gender? In thought? In the cosmos? Satterfield is a poet of high challenges and rewards.
—Greg Glazner