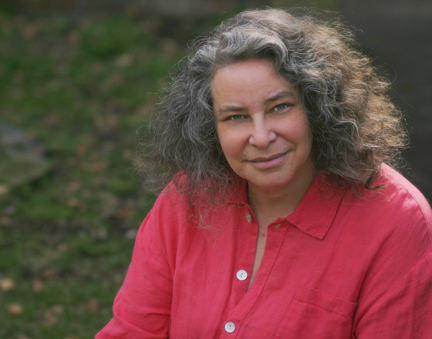 Kim Roberts is the author of four books of poems: Fortune’s Favor: Scott in the Antarctic (Poetry Mutual, 2015), Animal Magnetism (Pearl Editions, 2011), The Kimnama (Vrzhu Press/Poetry Mutual, 2007), and The Wishbone Galaxy (Washington Writers Publishing House, 1994). She edited the anthology Full Moon on K Street: Poems About Washington, DC (Plan B Press, 2010) and the nonfiction chapbook Lip Smack: A History of Spoken Word Poetry in DC (Beltway Editions, 2010). Roberts is co-editor of two literary journals, Beltway Poetry Quarterly and the Delaware Poetry Review, and the web exhibit DC Writers’ Homes. She is the recipient of grants from the National Endowment for the Humanities, the Humanities Council of Washington, and the DC Commission on the Arts, and has been a writer-in-residence at 14 artist colonies. http://www.kimroberts.org.

Poem from The Wishbone Galaxy

How to Imagine Deafness

Darken your ears until the tunnels
with their intricate clockwork
are sheathed in pitchy calm.
Hum a little blue, to yourself,

but keep it secret. The small bones
will dip delicately, like willow leaves
that merely brush the water’s surface,
in their repose. The small hairs

will lay down together like tentacles.
Listen: the lake stops its lapping
repetition of sibilance
(physicist, Sisyphus, sassafras)

and the great snail unfurls itself,
stretches its tongue longingly
toward the distant echo surge
that must be the heart.

This promising first book offers an eccentric commentary on love, sex and family. Roberts has a dexterous poetic voice, one that either tells a story or, better yet, disappears behind the story, allowing you to enter it. Roberts also has a keen ability to spot the perfect metaphor…Roberts lets her cadenced poetic voice carry the poem, allowing it to find its own language and story line. These poems comprise the lucky side of the wishbone.
—Publishers’ Weekly, June 1994

This uncommonly original and spirited book of poems is as bountiful as the universe itself. It is divided into three diverse sections, each of which bristles with a kind of glorious energy…There is a delightfully subversive list quality to the poems ‘Imagine This’ and ‘Darwin in Reverse,’ like layers being delicately but deliberately peeled away. The mother in ‘Mother’ is a female horseshoe crab and a sharp metaphor at that. While the daughter in ‘Daughter’ comes face to face with the real father who failed her and the dream father she created on the page…All in all, this book is an astronomical debut. Next time you look up at the stars, the one shining brightest might be a poet named Kim Roberts.
—Letter Ex: Chicago’s Poetry Newsmagazine, December 1994

The passionate, sardonic voice in these poems is that of a woman who boldly roams the universe and offers us meditations on love, sex, and the gritty mysteries of being female. The poems shimmer with the “ashen light of Venus.” The woman in them lives in moonlight, starlight, and the deep blackness of space.
—Minnie Bruce Pratt

Beneath the stars Kim Roberts has created a beautiful collection of poems. Her first book, The Wishbone Galaxy, is like a first kiss —memorable. Some of the poems explore the female presence in nature, others reflect the intellect one associates with genius.
—E. Ethelbert Miller

The Wishbone Galaxy is one of the best first books in my lifetime. I admire these poems tenacious tactile qualities, their skillfully concealed craft, their density and intensity. Moving, passionate, insightful, these wonderful evocatios of Eros should be appreciated by anyone interested — and who isn’t — in “the pressure of one body against another. These brilliant poems offer a constellation of pleasures.
—Bill Knott