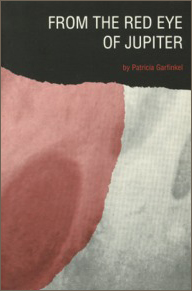 Patricia Garfinkel grew up in and around New York City except for an interval in California. She graduated from New York University in history and political science. From 1963-1965, she lived in Paris, France. Her poems have appeared in Seattle Review, Hollins Critic, Science 83, Washingtonian magazine, Visions International, Negative Capability and in numerous anthologies. Her chap book, Ram’s Horn, was published in 1980. Her poems have also been translated into Korean and Finnish. Since 1976, she has worked as a science writer at the Committee on Science, Space, and Technology in the U.S. House of Representatives. She lives in Reston, Virginia and has two sons who are both in college .

Some of these poems pull at long and fragile threads, looking into a personal past, engaging with the cryptographic task of understanding family myths, of asking the right questions. Many others explore violence, as episode or mysterious urge. Throughout the collection, the fusion of these strands reminds us that love is often the only choice we have.
—Henry S. Taylor

These poems announce closure, whether they touch relatives, ancestors, or the primal observances. And they announce acceptance to the ruthlessness of poignant rage, grief, and grace.
—Michael S. Harper