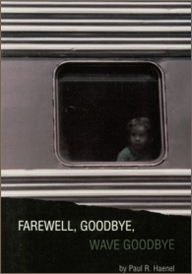 Paul R. Haenel was born and raised in Pittsburgh, Pennsylvania. He was graduated from Penn State University in 1975 with a B.A. in English. After four years as a German language voice intercept operator with the U.S. Army Intelligence & Security Command, including a tour of duty in West Berlin, he lived for a time in Milwaukee, Wisconsin. He has worked for Dean Witter Reynolds since 1979.

It is not just that he sees details that no one else notices, but that he sees them in the context of unexpected worlds of thought and memory.” Though said originally of the great French poet, Jean Follain, it catches with startling accuracy the gifts of Paul R. Haenel, for he can “pay such close attention to things they seem strange again … show the value of the smallest gesture … the vibrancy of things.” In a voice calm enough to penetrate the clamor Paul restores the value, reveals the miraculous, and hands us the richness we’re usually too preoccupied to notice.
—John Haag, Professor of English, Penn State University

Departure is at the center of our lives, and we are always waving goodbye to someone or something. Acknowledging this fact. Paul R. Haenel has dedicated himself not to a poetry resignation or sentimentality but of quiet yearning. He finds in moments of separation and loss a numinous quality, “something there/always there/and yet not there.” This paradox of the present absence shines through and hints at a kind of spirituality, making it possible “nearly” to believe in God and lending Haenel to exclaim in astonishment, “Imagine me looking toward heaven.” Receptive and resistant, he struggles within himself, and the outcome in this brave and hopeful book.
—Neal Bowers, Editor, Poet & Critic; Professor of English, Iowa State University