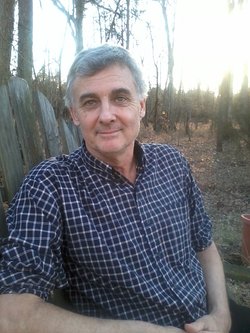 Bernard Jankowski’s poems have appeared or are forthcoming inBaltimore Review, Cumberland Poetry Review, G.W. Review, Monocacy Valley Review, Poet Lore, Potomac Review, Sycamore Review, Visions—International, Willow Review, and Wordwrights! He also was the featured poet online on Poetry Daily when Sycamore Review was featured.Jankowski co-owns a business in Frederick, Md., that provides fundraising research and database consulting services to nonprofit organizations and publishing companies. He also teaches creative writing at Phillips School for Contemporary Education in Laurel, Md. He received his M.A. from the University of Arizona and his B.A. from Western Maryland College. He lives in Poolesville, Md.

Excerpt: The Bullfrog Does Not Imagine New Towns

Dear Vallejo,
I apologize for I have
died so little today.

I blindly strode past
the clenched hands
at the bus stop
dissolving in the rain,
watched the beggars raid
their baskets
without my prayers,
failed to face
the trains’ icy breezes,
as they rushed by
with their heavy loads
of mannequins and masks
and occasionally a child.

Vallejo, dear Vallejo,
how I ignored
the secretaries diligently
typing into blue infinity,
the pigeons clinging to tiny hopes
on the telephone wires,
the slick black umbrellas
protecting the commuters
like shells.

I was not up
to your grim commitment.
I had nothing left for
the dentists – so many teeth!
the housewives – so many chickens!
for the mid-level managers,
the gas station attendants,
the cooks, the dry cleaners,
the priests.

The city surrounded me.
So many deaths to die!
And I spent all day
absorbed in my own.

You tell the one again
about the midget
lifting a refrigerator,
the one-armed drywaller
from Highlandtown,
and the crooked
Baltimore City cop.
But it doesn’t get
the same guffaws.

You still try to
rise like a hero
for the sunup to
sundown suckers,
beat your chest once more
at the whorehouses,
rattle the monkeys
in their cages.
But you’ve overheard
from the regulars,
“Eddie’s gettin’ pathetic.”

It was never on the map
for you to change.
Each Saturday night
like the hundreds before it:
Comb Baltimore for a Hotspot
ready to get hotter.
Chase the Fells Point waitresses,
“those heavenly little oven-stuffers.”
Hang with men
who don’t mind
a bullet in the thigh.
Leave everyone to wonder
what your next move will be.

Catch a few hours sleep and
then roar into another Sunday:
Make the Pimlico
backstretch your stage
and the jockeys your stooges.
Pop a cannonball
with your suit on
into a pool filled with nieces.
Leave your family frightened
to invite you to weddings.

By now, it’s getting old.
Your settled-down friends
won’t return your calls.
You work your way down
your list of run-around friends,
past the ones who
are dead or married,
past the guys who
were divorced for awhile
but then got remarried,
down to the guys who
really don’t like to drink or
who don’t like to talk.

Until you realize,
“Hey, my nephews
are old enough now.”
You grin to yourself,
it sounds like a plan,
“Nephews.”

Bernard Jankowski’s bullfrog does not imagine new towns because it is submerged in its own bog-like world. That world is rich and brackish enough to inspire these powerful, rough yet keenly felt poems. Jankowski’s train, in the poet’s own words, “sweeps like a big black owl over the snow”, and the reader shudders with both pleasure and dread.
—Moshe Dor

These are the poems of a man determined to be a man, to rediscover “the bold innocence of birth” as he journeys through America’s stunted and wondrous towns and cities and the sorrows of ancestors shadowed by dislocation and silence. He finds his allies in rivers, owls and “sorrowful brown eyes” but, most of all, in his own x-ray vision which denies physical boundaries to find the talismans that save him–and us: solitary blue wolves in old women’s eyes, a monk in each November oak, pumpkin-headed babies ice-skating among a graveyard’s plastic bouquets. Jankowski looks hard, denies nothing.
—Mary Ann Larkin