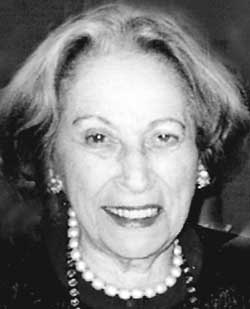 Faith Reyher Jackson, winner of the 2002 Washington Writers Award, has had “Nine Lives” in numerous geographies, as a dancer and choreographer, teacher and editor. Her 1997 biography of William Lyman Phillips, “Pioneer of Tropical Landscape Architecture,” was nominated for annual nonfiction awards.Jackson was Book Editor of the Miami Herald, on the Women’s Page of the New York Post, and her reviews, fiction and articles have been widely published. Some poems from as yet unpublished collection, Rainbow In The Street, were recorded as “Mary Martin Sings For Children.”Jackson was Head Mistress of the Academy of the Washington Ballet, and adjunct professor at American University. Her late husband, Melvin H. Jackson, founded the Hall of American Maritime Enterprise at the Smithsonian. She has three grown sons and five grandchildren. She lives and writes at Collington in Bowie, Md., where she has a chest full of unpublished stories and another novel in the works.

Excerpt from Meadow Fugue and Descant

Chapter Three
Uncle and Aunt solved the mechanics of eating and clothing and housecleaning in the most economical way to concentrate on Arnold Charroz sculpture and Sybilla Charroz’s tapestries and paintings.

Aunt loathed housekeeping, so her way of beating drudgery was to master it. She never hurried and never wasted time on busy work. I have seen her paper a room, fix plumbing, tile a floor, pitch hay, sail a boat, and I believe she could amputate a leg if she had to, with the medical book in one hand, and the patient would live. And she had us doing our full share as far back as I can remember.

Old houses far from New York were cheap, so in 1923 they bought the old Clark farm with one hundred and fifty acres of field and woods on the water, in Spruce Cove, Maine . They sublet the New York studio and took us away from the city every summer.

By the time I came along, Aunt had finished painting the dining room walls with an overall wall paper design, intricate yet light, of leaves and people and tigers. It was an extraordinary achievement.

The bold colors associated with them were new then, and practical: chrome yellow, orange and battle-ship grey hid imperfections in walls and bad floors.

In New York , Uncle had to have a studio with a cement floor for his heavy stone figures and there was no cash for studio and apartment. They found the little three-story corner house downtown on West Tenth street and Greenwich avenue. A bakery, and Uncle’s studio occupied the first floor. Vivid blue, red and orange lightened the dismal rooms and seemed to help combat grime and soot.

Across the narrow street was the old red brick Jefferson Market Women’s Detention Center , which looked to us like a large castle. Once, Argil and I looked up and saw three women huddled in a window on a high floor of the jail tower. They were yelling and gesturing to get our attention and we could almost hear them over the traffic. We watched, fascinated, while they sent down a wadded paper around a penny, on an incredibly long string. We looked at each other: should we? It was scary. Above us the ladies were making a commotion, pantomiming something. Argil took a deep breath and unwound the paper. It said “Sope plse.” We looked up again and saw one woman pretending to wash her hands.

Uncle rounded the corner at that moment, took in the scene, read the note and sent Argil into the house for a bar of soap. He helped us tie it on the string and tipped his hat to the women. They waved back in high glee. He was dressed up in his tweed suit and Irish hat, and looked smashing. “Where’ve you been?” Argil wanted to know. He shrugged. “Business. Where else?” Then he asked us:

“How would you like to be locked up with a lot of smelly women and no soap? But this is the end of it. Don’t you kids pick up another note, understand? It’s not your business, stay out of it. Let it be a lesson. And stay off the street,” he said as he left us. “Go play in the park.”

We did play in Washington Square , daily and at length, but roller skating on the streets of Greenwich Village was my only city delight; the sensation of release and speed was narcotic, and it opened a private world to me. If Argil would not go with me, I went off by myself. The store-keepers and Charroz friends all knew me, as did the policeman on the corner—and they were there, then, directing traffic. Many mornings he stopped cars to beckon me across the street: “Move it, Jenny, you’re late again.” I would skate slowly past Patchin Place , looking through the gate, to see if Aunt were visiting a friend. Then I would hare across Sixth avenue , roll up Eighth street , turn left on Fifth avenue , all for the exquisite pleasure of going round and round on the smooth pink pavement in front of the Fifth Avenue Hotel, until the door man chased me away. I was spotted there by one of Aunt’s friends a time or two, but thought nothing of it. Coming home, I would brake down the hill to see if Mr. Martinelli were at the produce stand in front of Ugabono’s; he often gave me an apple or pear. I would wave my thanks and go cheerily home. Only, one late afternoon, already dusk, he saw me and called out, holding an orange over his head: “Come, come, little Jenny—no kiss, no orange,” and our Aunt Edith, on her way back from work, saw and heard. It hit the fan.

“Dammit, Sybilla, I told you what might happen, when we heard she was hanging around the hotel. Let it be a lesson. It was bad enough when she ran off into the woods in the country, how the devil do you propose to control her here? Can’t you tell her what the city’s made of? She’s only eight, what does she know? Everybody for blocks knows her by name, for God’s sake. Like mother, like daughter, I told you, let it —”

“ Arnold , you villain, the child is right here listening—”

“So I see.” He spoke to me in his wonderful tell-a-story voice. “You have to learn to be verree careful where you ride the white swan with the ruby beak, Jennifer-Jennifer. Some women are verree attractive, every man in town is on their tail —”

Aunt Sybilla stopped him with a high irritated laugh, while I stood there, hot and dirty, trying to wipe away tears with a grimy hand. “Look at her, for heaven’s sake, more urchin than siren. Go clean up for supper, Jennifer, and hurry.”

A fine read, written with precision, funny and sad.. When five-year-old Jennifer Hampton suddenly becomes the ward of the seemingly Bohemian Charrozes who are serious prolific artists, you think that she is simply being folded into their sell—centered pursuits, only to realize that they take as much care with this child as they do with the sculptures and the paintings they produce, but with much less fuss.. The family landscape is as rich and textured as the lives they lead in Manhattan and Maine.
—Marguerite Kelly, Syndicated Columnist, Washington Post.

One feels privileged to be admitted into the unconventional and gifted Charroz family, whose cast of characters is so vividly defined by the author. When an orphaned girl becomes part of it, and we follow the development of her individuality and talent, one forgets it’s a work of fiction.
—Eli Flam, Editor, Potomac Review

This is very good writing about a talented young protagonist doing unusual and often ornery things. The primary characters are eccentric, and the situations poignant. The novel is set on an island village in Maine , and Manhattan’s Greenwich Village, both beautifully described. As a long- time professional writer, Jackson knows the value of language and the demands of good plotting and characterization. This is fiction of high quality.
—Elisavietta Ritchie, author of In Haste I Write you This Note: Stories and Half-Stories, The Arc of the Storm, and other collections.