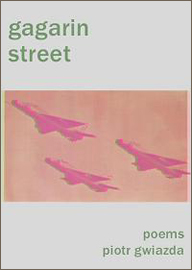 Piotr Gwiazda was born in Olsztyn, Poland, in 1973 and came to the United States in 1991. His published works include Gagarin Street(WWPH, 2005) and James Merrill and W.H. Auden: Homosexuality and Poetic Influence (Palgrave Macmillan, 2007). His poems have appeared in many journals, including Barrow Street, Columbia, Drunken Boat, Hotel Amerika, Margie, Rattle, The Southern Review, Talisman, and Washington Square. He has published book reviews in Chicago Review, PN Review, Postmodern Culture, the Times Literary Supplement, and elsewhere. He is an Assistant Professor of English at the University of Maryland Baltimore County, where he teaches courses in modern and contemporary poetry.For interviews, review copies, or to arrange a reading, contact the author directly:
Phone: (410) 455-2052
Email: gwiazda@umbc.edu

When I was a child I lived on Gagarin Street.
Today it’s called Pilsudski Street.
Ten years ago the sun rose, a little wind blew, a little bird sang,
a little empire fifty kilometers away
fell, and so did its heroes: Lenin, Dzerzhinsky,
Bierut. This one, though, makes you pause for a moment
after his lonely voyage in spinning Vostok
after his tumble from orbit, his fifty-fifty chance of survival.
After all, he was our hero—this they taught us
in middle school—“our” meaning all of us, all of the world.
Not so. Today his space-suit rots
in a museum basement, his Russian face with Soviet smile
disappears from history textbooks, his round-the-globe celebrity
revoked (unanimously) by a municipal
subcommittee. Well, I suppose that’s how history is made
or unmade. Nothing is certain till it becomes history
and then it is unmade. I’ve been carrying
this city in my pocket for so many years and today—
look: a hole. What’s happened to it?
Streets are renamed, monuments rededicated,
old heroes buried, still older ones brought back from the dead.
In place of the crumbling soccer stadium, I read in the paper yesterday,
they’re building a new church. Or is it a new stadium
that will replace a church? I can’t tell for sure,
but this I can tell: my city doesn’t recognize me, buildings
give me evasive looks, the Old Town district
(did it get a face-lift?) turns its shabby back on me, the parks I loved
either leased or closed, even Gagarin Street,
now Pilsudski Street, pretends it’s never seen me before
as I cross it, then re-cross it, trying to stir its memory
by taking pictures. Nothing helps!
Granted, some things have stayed the same: Fiats,
kiosks, drunks (though now the homeless
seem to outnumber them), the city-hall clock still strikes twice
at one in the afternoon, and better times are as usual late
for people at the bus stop. The place itself, though,
has changed. I don’t mean the surfaces, I mean
this: passing by the dreary, four-story apartment building
where I once lived, I ask myself
what is real and what is past and therefore
imagined? For I can almost imagine
this is not my hometown at all. Suppose I’m just passing through,
another happy tourist with a rented car
and digital camera (these days you see droves of them
in all Central Europe). Nothing connects me to this place,
nothing keeps me here, nobody waits for me.
After all, it’s only another foreign city and I’ve seen so many,
each slightly different from what I expected.

Days were predictable, times uncertain.
A heat-wave paralyzed the Eastern Seaboard,
the war inched on, Dow Jones kept sliding,
I had just moved to a new city. Every afternoon
I would take walks by myself, learning street names
marking buildings—I read sign boards, posters,
inscriptions under statues, people’s faces
(some would even ask me for directions), strolled
through the cool halls of churches, museums, libraries
with the guilty curiosity of a student
skipping school. So much time,
so little money. I survived on bread and Tolstoy.
In the newspapers, another suicide bombing,
another corporate scandal. Meanwhile,
the sun would rise above the painted harbor,
Tuesday imperceptibly slip into Thursday.
Such bliss. Such misery. I savored my solitude,
I craved company. My pocket notebook
was filled with apocalyptic images. In the West
half of America was on fire.

Piotr Gwiazda’s Gagarin Street summons not a Kierkegaardian either/or, but the subtly complex both/and of Eastern European masters Tadeusz Rozewicz and Vladimir Holan. “A scoreless song; just deepening uncertainty and silence”—few can tell this tale as Gwiazda can, a tale of “clouds . . . dense like Philosophical Investigations,” a tale and a teller strong enough to question whether “the man I am should cease to be?” These poems remind us how easily the Gagarin Streets of our youth may disappear, and of the poet’s vital task to re-inscribe them for the future’s fellow travelers.

The personae of these wry, arresting poems yield their secrets slowly, when they choose to at all. Piotr Gwiazda’s world is one without certainties, where men and women communicate mainly by accident, where the streets of one’s hometown have all been renamed—a world both hypothetical and futuristic yet very much of this moment, home and exile no longer distinguishable. Beneath these compelling, elusive surfaces moves a penetrating and skeptical intelligence, like his characters “simultaneously a refugee and a refuge.”

From the title poem of Piotr Gwiazda’s impressive debut collection, a recurring theme announces itself: altered history and the poet’s qualified attempts at recognition, if not full reclamation. Over and over, we follow along haunted streets real and imagined, sharing our guide’s disorientation as the excavated past offers little clue to the future. Names have been changed, but not to protect the innocent. This book is full of terrific, lively poems I wish I had written: “Private Conversation,” “Avenue of the Conquered,” “Dispatch,” “The Refugee,” and many others.

“In Gagarin Street we encounter a poetic mind engaged in the long process of coming to terms with the after-shock of a collapsed world. It gives us a sense of what it might have felt for those around the Italian peninsula after the sack of Rome. There is a mental agility that comes with the despair of losing the known and the twinge of hope in looking ahead.”
–Book/Mark: Small Press Quarterly Review

“There is much ‘angst’ driven poetry about at the moment, largely led by the events of 9/11. What makes Gwiazda’s collection different is that it stretches the ‘angst’ back further in time. It stretches to World War II, to pre-history, to birth. This is a collection that urges us to look beyond recent events, to put all in perspective and not allow other conflicts to be forgotten.”
–Galatea Resurrects (A Poetry Engagement)

“Through rich imagery, complex metaphors, and vigorous wording, Gwiazda achieves a striking lyrical force and comes close to creating a vital language of his own.”
–Jacket

“Bridging the hypothetical and the mythical into a word where secrets are revealed piece by piece, Gagarin Street provokes deep thought at the changing nuances of personality and environment with the passage of time.”
–Midwest Book Review

“Poland is the land of poets: Milosz, Herbert, Szymborska. Gwiazda is a worthy successor to his Nobel-winning predecessors. Like theirs, his poetry is a passport to our understanding of an alien world much like ours.”
–Multicultural Review

“Gwiazda demonstrates a mythopoetic instinct capable of shattering isolation, and an ability to play with language that may create worlds as yet unimagined.”
–Pleiades: A Journal of New Writing